Sant Andreu de Porreres
About 818m south (on the sunny side) of Puig Ou (quaintly named in English as "Egg Peak") in the Bac Valley. The trail is easy to walk and crosses next towards Sant Pau de Segúries; close to the confluence of the stream of Sant Andreu and the river of the Vall de Bac, from where the path leads across to the right.

Sant Andreu de Socarrats
In the area of Socarrats, which is situated beside the old manor house of the same name. The church is built at the foot of the range of the mountain of Sant Miquel. Less than a kilometre from the village of Llocalou, heading towards L'Hostalnou located on a deviation of a short paved path you will come to

Sant Feliu del Bac
In the Bac Valley, on the northern slope of Sierra Malforat. The church is built on to a small hill in a small, dense wooded area. Access is from the Bac Valley, and the trail passes by Llongarriu or a newer track that opened in 1991 towards the Coll de Capsacosta from the C-153 road.

Sant Martí del Capsec
Is situated on the southern slope of the Sierra de Malforat, at the extreme eastern end. Getting here is from the village of Llocalou, following the road and after a couple of kilometres taking a path that breaks off from the road and the church is on the right side. The path leading to the church is mostly paved except for a small portion towards the end which isn't.

Sant Martí del Clot
Is on the sunny side of the Sierra dal Malforat, on a small foothill of the group of mountains known as Clot. From the C-153, towards Sant Salvador de Bianya, passing the bridge of Coromina, there is a break in the path; and partly paved the path follows the line to below the cemetery, the church and the old rector's house.

Sant Martí de Solamal
Is on the left side of the river Santa Llúcia de Puigmal, near to the parish church of Sant Pere del Puig (or Despuig, depending on sources) and would have been classed as an "auxiliary" church. It can be reached from the C-153, following the road past Can Grèvol, past the area of Sant Pere del Puig, and the path rejoins the C-153 close to Hostalnou.

Sant Miquel del Mont
Is situated at an altitude of 793 metres, on the summit of the mountain of the same name, and is the division line between the valleys of Olot and Bianya. It can be accessed on foot from both sides of the mountain; as well as the track running form the N-260 road. The chapel is an "auxiliary" of Santa Margarida de Bianya, and is located on the convergence point between three municipalities.

Sant Miquel de la Torre
The church of Sant Miquel de la Torre is in the vall del Bac, on the southern side of the Puig Ou, close to the hall or house with the name of "the Tower". From the hostal in the vall del Bac, leave the path and cross the river close to Cal Ferrer and maintain an easterly direction, until you reach the church. It is situated on a meadow covered slope. A short distance further the cemetery can be encountered as well.

Sant Pere Despuig
Is a church in the same area as it’s name, and the church is situated off of a small hill, in the formation of mountains known as Cadamunt, in the middle of the beautiful plains of Bianya. To arrive here, you can follow the C-153 which also will lead to the church of Sant Martí de Solamal. The church is quite easy to find from the path that climbs the hill.

Sant Ponç d’Aulina
Is on the south side of the Sierra del Capsacosta, at the head of the valley of the same name. Following a deviation from the C-153, shortly before reaching the tunnel of the Capsacosta is the turning on to the track that leads to the church, on the right hand side. It is advisable to follow this path on foot.

Sant Salvador de Bianya
Is located at the top end of the plains de Bianya, near to the small village with the same name (Sant Salvador de Bianya), and close to the old town annexed in to the Vall de Bianya in 1969. The church currently maintains the status of the parish church. You can reach this from the C-153, towards the direction of the Coll de Capsacosta, and continue towards the direction of Sant Pau de Segúries.

Santa Magdalena del Coll
Is not a long distance from the church of Sant Feliu del Bac, and can be found close to the Masia del Coll. It can be easily accessed from the path that runs down from the Coll de Capsacosta. You can also reach the same trail from the Bac Valley, and continue through Llongarriu along the shaded side of the Sierra de Malforat.

Santa Margarida de Bianya
Is on the north of the Sierra de Sant Miquel del Mont; and from the C-153, crossing the village square in L'Hostalnou and then taking an easy, paved track to the church; which also currently holds parochial status. Worship services are regularly held at this church.

Santa Maria de Castellar de la Muntanya
Close to the old village of Castellà de la Muntanya is at the extreme east of the Vall de Bianya. The church is situated on a mountain slope. Getting to the church requires taking a trail that crosses close to Sant Joan les Fonts, the river of Bianya, and which climbs to the Sierra de Vivers and ends near the church of Santa Maria. 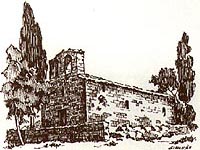 Santa María Sacot
In the vall del Bac, is close to the old manor house of Llongarriu on the northern slope of the Malforat Sierra. It can be reached on foot, by taking the path from the front of the hostel Vall de Bac following the path towards the bridge of Llongarriu, with the track running through the valley. After this, the track turns passing the site of Llongarriu.

You are about to leave this website. If you want to continue, click the OK button.
OK